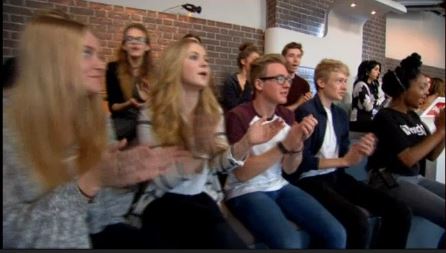 Andover College AS English Language students made the 6am start recently to travel to the Channel 5 studios in London to be in the live studio audience of morning talk show The Wright Stuff.  English Language students are regulars to the set, with this being the fifth year students have had the invaluable experience of seeing a live TV broadcasting in action. Matthew was joined on the panel by actor Jeremy Edwards (Holby City, Dancing on Ice), Rebecca Wheatley (Casualty) and Place in the Sun presenter Scarlette Douglas.

The sensitive yet substantial topics debated on the show, including talks on whether communities should pay extra for more police officers on Britain’s streets and whether looks or intelligence will get you further in life, allowed students to broaden their knowledge and understanding of how topics are represented and contested in the media.

Rob Price, A Level English Language Lecturer and 6th Form Curriculum Leader, commented: “After the show, presenter Matthew Wright held a twenty minute question and answer session with the students where he answered questions including ‘what was your most awkward interview?’, ‘how do you sustain an interview that is clearly breaking down?’ and ‘how do you deal with problem interviewees’, with his responses all helpful for the students’ understanding of spoken language in action.  They also asked Matthew about his time in the ‘I’m a Celebrity’ jungle, something he found amusing and brave.”