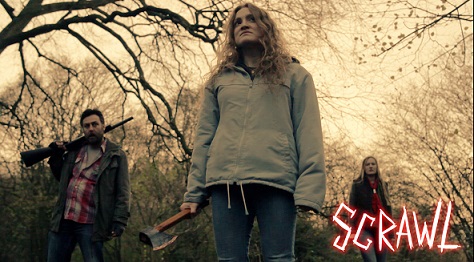 Scrawl, the fun horror feature film made and produced by our students continues to receive award nominations.

Media lecturer Peter Hearn who wrote, directed and produced Scrawl, along with the visual effects team have been nominal for Best SPFX (Special Effects) Award at the Macabre Faire Film Festival which take place on 16 January in Long Island, New York.

Scrawl is also in the running for the Best Film Trailer at the Macabre Faire Film Festival but we need your votes!

Scrawl’s film poster is also up for award honours at Macabre Faire Film and again we need your votes!

Please click here and vote for us for the Best Poster Award.

And if all that isn’t enough we’re off to the Golden Rake awards in February for Best Indie Horror.

TheBlood-Shed.com’s very own independent horror awards show is back for its second year!

Winners are presented with a handmade award statue, their film and name immortalized on The Golden Rake Wall of Fame. Winners are announced in February.